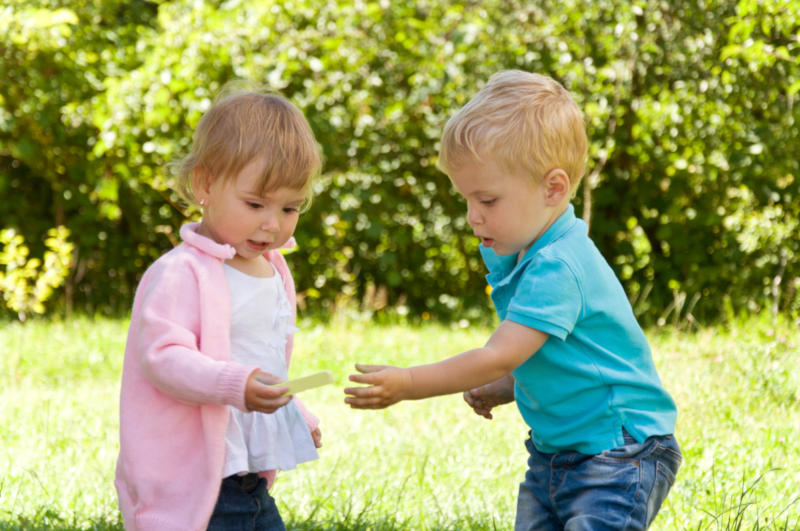 Nature is full of wonder and delight. For young children it can also be an endless toybox if they’re allowed to let their budding imaginations run wild. With just a little encouragement from adults, children will make a toy out of just about anything: sticks, rocks, acorns, leaves, or even dirt. As adults, we sometimes want to guide a child’s attention or direct them toward what we think might be fun, instead of letting them make those decisions for themselves.

I was at the park the other day and watched a group of young children as they scampered around the edge of the playground where it met the woods. Intently focused on their imaginary game, I had to get a little closer to see what they were up to. They had carefully created little piles of acorns next to piles of small rocks, and another pile of sticks. As I listened in, they chattered endlessly about what they were gathering, what they weren’t gathering, and what they might gather next.

When a fourth child of similar age arrived, they carefully explained the rules of their elaborate game, and he joined in. The adults sat quietly on a bench in the shade, while a group of older children were content to swing on the swings and slide down the slides. The younger children were totally engaged with what they found on the ground, and completely engrossed in their imaginary game.

Even though it might seem like they were just playing, there was so much learning happening in that moment. First, the children were allowed to play outside the designated play-area boundaries which empowered them to explore, and also gave them agency. Second, they defined and agreed upon the parameters of the game which taught valuable lessons in collaboration and cooperation. Third, they were choosing objects that looked alike and interested them. When the fourth child arrived, the other children shared what they were doing, and the fourth child was able to choose whether to join in the game—or to ramble off and do his own thing. All the children improved their dexterity and fine motor skills as they picked up and carried the small treasured objects they found.

Finding things in nature that look alike either in shape, color, or size is a wonderful idea that adults can suggest, but it’s important to stand back and let children do the rest. For younger children it can even be a time when they learn their shapes, colors, and sizes, which does require a little more engagement and encouragement from adults. Nature is a wonderful teacher with endless lesson plans.

Jennifer L. Bristol is the former director for the Texas Children in Nature network at the Texas Parks and Wildlife Department where she raised awareness about the benefits that nature provides for a child’s healthy development. She has authored several articles for Texas Parks and Wildlife Magazine and her first book, Parking Lot Birding: A Fun Guide for Discovering Birds in Texas with A&M University Press will be published in spring 2020.